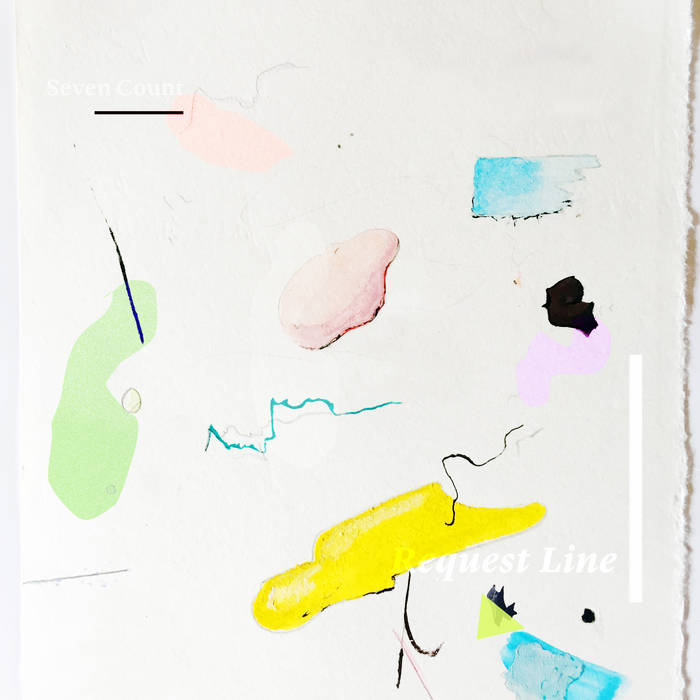 This is one potential narrative.

Request Line documents a musical process that began as a series of small generosities and reciprocities, and grew into a sprawling web. In 2017 we had become fascinated (and a little overwhelmed) by music’s power to collapse disparate times and spaces together, in a process we called “folding”- the sampling, remembering, remixing, and reciting of earlier experiences into the present. Our first album documents that fascination: field recordings, recorded samples, live sessions from around the Northeast, and radio broadcasts, were folded over and again into the same sonic space. Creating that record opened so many potential pathways: what if we folded in conversations with friends and strangers? Live improvisations and street sounds? Can we invite participation into the folding process?

We took those questions to Border Patrol in Portland, ME, and created Invitation: a research office / pirate radio station / jamspace in the back room of an old dentist’s office. Invitation was an open-ended platform for shared investigation into music, sound, and reality. If that sounds vague, it was. We were experimenting with our process in public, and in a place with other people whose interests, desires, and creativity dovetailed and diverged from our own. We recorded and broadcast everything, we cooked dinner for people and mic’d that and broadcasted it too, we jammed, we had workshops on how to host a good party, we mashed up Kate Bush covering Elton John to the sound of a trumpeter parading down the street.

Could we take this permeable system and expand it into a truly immersive musical experience? Could we add projections and drones and big drums to the mix? Could we fold in even more? These were our dreams for Request Line, an exhibition at BUOY gallery a few months later. We attempted to install our entire music practice in a place, and see how it could respond to the myriad of interactions that constituted that place’s daily life. And, at the same time, we wanted to continue to open gateways to totally other spaces and times.

We were in residence at BUOY for a week, during which we set up multimedia performance stations, ate lobster, developed daily routines, gave Tarot readings, and tried to engage the town in visiting the exhibit or tuning in to our pirate radio broadcast on 87.9FM. BUOY occupies half a former post office, and shares a wall with The Black Birch, a busy and wonderful restaurant, and there is constant traffic between gallery and restaurant. So the album emerges from a space defined by cycles of giving and receiving, receiving and responding, consuming and producing, opening and closing.

Al, who founded and curates BUOY, also bartends at the Black Birch, and was a model of generosity to us– whether he was providing the vinyl record collection that we sampled throughout the week, pulling his own favorite tunes for us to enjoy, mixing drinks, finding us a place to stay, joining us on guitar, telling stories, and inviting participants, players, and friends to the installation. All these acts of giving helped us build a network of hospitality and reciprocity inside the gallery and the town. One night, we laid him down in the middle of the room, covered him with a safety blanket, and gave him a sound bath. You can hear some of that on Request Line. (We also gave a birthday sound bath to a salty falcon rehabilitator!)

Al also connected us to Brett– a friend of his who worked one block up from BUOY. He joined us on flugelhorn for a few performances, and brought magic to the room.

In the midst of an improvisation, someone sampled a track by Richie Havens: “Follow.” Afterwards, a couple in the audience told us that it was their wedding song. The next day, their daughter brought over her guitar and played us a few tunes, to which we spontaneously provided accompaniment.

One night over dinner, a stranger thanked us for the previous night’s performance. They had listened to it on the radio, on their houseboat, over a glass of champagne.

Rachel, who runs a textile business out of Buoy’s office, decked us out in brightly patterned dresses and shirts from her collection, adorning us in archetypal costumes that added a sense of ceremony to the performances.

In the midst of our installation, a Black Lives Matter protest swept down main street. The move was to join- we brought the horn section and a cowbell, joined up with a fiddler, and formed an impromptu marching band.

All these little moments and coincidences and shared spaces felt possible because we considered everything and anyone a potential collaborator--not just fellow musicians, but the record collection, the restaurant, the news of the day, the weather. It’s not mystical (it is), it’s just the payoff when you pay close attention to what’s happening around you. These are lessons from improvisation and listening, practiced in a musical setting, but applied to all manner of interaction.

Request Line is a section of a spiral that begins way before this narrative and continues far beyond. The spiral is the push-pull shape that all these small moments amount to. It moves in and out, up and down but always toward the unknown.